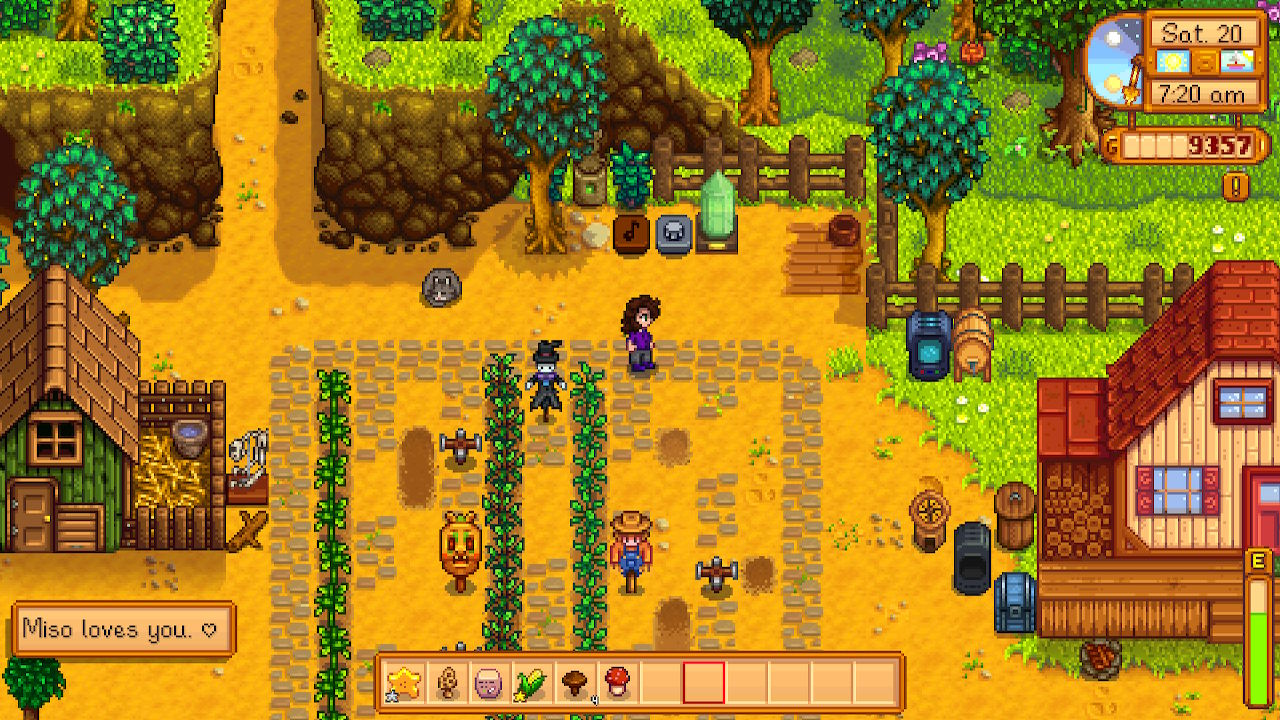 Approaching the end of my four-hour drive to my hometown this past summer, I rolled down my windows and listened to the wind blowing through the fields. My summer was packed with internships and classes, and despite the unfortunate reason for my trip to northern Michigan, this moment was serene. The urgency and constant movement that dominated my summer came to a pause in the warmth and silence of the swaying corn. The flat, quiet farmland vistas reminded me of the reality behind my new favorite genre of games: farming simulators.

In many ways, farming simulations, or sims, helped me achieve the peace I felt on that car ride in my everyday life through quicker, virtual means.

Farming sims are games in which the player typically grows and harvests crops, raises animals, and decorates their farm. There is also a large social component to most games in the genre, often involving both friendship and romance through a system of talking with the various townsfolk, giving them gifts and leveling up your relationship. These bonds and activities are not just vital to the experience of each game but have also helped me grow in unexpected ways in real life.

There’s been a noticeable increase in the number of games that incorporate elements or infuse the genre with some sort of twist. One such game is “Slime Rancher,” which revolves around the player raising a variety of adorable slimes. In games like “Sakuna: Of Rice and Ruin,” farming is integrated into the game as a way of upgrading the main character’s abilities, but the main focus is adventure and combat. There’s a variation out there for everyone, and certain farming sims tend to have very active communities both online and offline.

My first encounter with the genre goes all the way back to the beginning of elementary school when I heard friends talking about a game called “Harvest Moon.” The series was one of the first big farming sims, and it continues to have an active fan base. However, I was never particularly interested, and the few other farming sims I played failed to grab my attention.

My journey would actually begin over a decade later when I finally got hooked on a farming sim for the first time: “Story of Seasons: Pioneers of Olive Town,” which actually happens to be a part of the “Harvest Moon” franchise. Although the game was far from perfect, I became addicted to the gameplay loop of gathering crops and animal products, selling them, upgrading my farm and socializing with the charming characters along the way.

What initiated my obsession was the “just one more day” mentality. Twenty minutes until my next class? That’s a perfect amount of time to water all my crops and milk the cows. On busy days, when I’m working on homework late into the night, that precious hour until bedtime isn’t enough time to watch a movie or get invested in a longer game. Fortunately, it’s just enough time to gain more hearts with potential marriage candidates, catch a few fish and mine for gold ore.

While this is the hook, the addicting gameplay loop is far from the sole reason the genre has gained traction. In fact, it’s more about emotional connection. I’m the type of person to overbook myself, and I struggle with anxiety. When I hop into the world of “Stardew Valley” and get to work on Wispy Willows Farm, or when I discuss dinosaur origins with my chicken in “The Sims 4: Cottage Living,” it’s a mix of relief and control.

There are people to talk to who won’t judge the way I move my mouth too much when I speak. My virtual crops are more forgiving of their lack of water than the dying succulents on my apartment windowsill. My cows will always be there to display a pixelated heart when I pet them, even on the days I visit home and my childhood cat runs away in fear of the stranger.

Growing up, my stuffed animals, books and Nintendo DS were my rocks. They helped me calm down and navigate a world that loved to throw curveballs at me. My memories of anxiety begin before I knew what the word meant, but those memories are beginning to fade in favor of moments like beating my very first video game and solving puzzle games at recess.

Today, farming sims have become a similar comfort. Even on days when I’m too mentally exhausted to play something, the warm embrace of a pixelated summer sun draws me in. It echoes the place I grew up in a way but reminds me that I’m stronger now. Whatever curveball may come — be it a wilting digital pumpkin or a family emergency — I can handle it.

This summer, the farming sim genre has finally clicked with me in a way that is emotionally relieving. We are in a transitional period, surrounded by an uncertain world. We are existing in the liminal space between in-person and virtual. However, the comfort that the rise of the farming sim can give us is not only digital — it’s tangible.

So if you see me on campus huddling over my Nintendo Switch, organizing my maker machines in “Story of Seasons” or building fences in “Stardew Valley,” know that I’m growing not only crops but self-confidence as well. Though classes have begun, the leaves will soon change, and the threat of frozen winter soil is fast approaching and farming season will never end — and for that, I’m thankful.