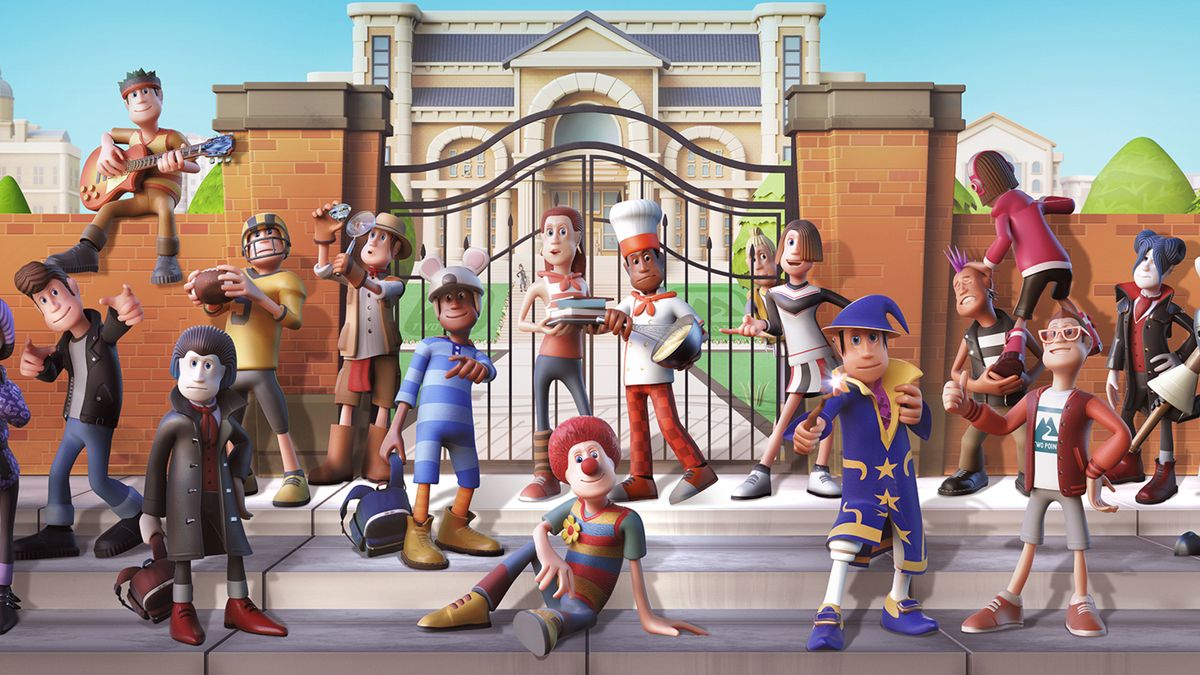 Two Point Studios is taking you back to school with Two Point Campus, the follow-up to its ridiculously addictive Two Point Hospital management sim. You can expect all the same dad jokes and charming eccentricity from the world, but with your new role as a college manager, you’ll be getting even more involved in the lives of your students and staff.

One of the major changes that you’ll notice straight away is that unlike the patients of Two Point Hospital who, if you were doing your job well, were in and out quickly when cured, you’ll be looking after each class of students for much longer than the time it takes to remove a saucepan from someone’s head.

“In Two Point Hospital there was a trait system and there were relationships being formed between staff members, usually, but you’d never really got to see enough of it, and you rarely saw it from the patients, because they came in to get a diagnosis, they were treated and they left,” explains studio director Gary Carr.

“So what we’ve done is we’ve come up with a game where you get to see these relationships and these kinds of personalities bloom, because they’re with you for a long period of time, now you’ve got four academic years with these students. And they spend a lot of time together in groups, this kind of group behavior, good and bad plays out, and you’re there to kind of hopefully guide your students through it in a number of different ways.”

That means you’ll need to take a much deeper interest in their emotional well-being, as well as their educational ones. In their four years, the students will have individual needs, like specific items to complete class projects, or a need to socialize with like-minded people. There will be different cliques, like the classic jocks, goths and nerds, different professors to shape your teen charges, and students will succeed, fail, or drop out altogether depending on how well you keep spinning all those plates.

“So it’s all about trying to balance both the academic side of things and making sure that students have everything they need, like libraries and the right course materials and lecture theatres and all that kind of boring stuff, but also the fun stuff of having the clubs, the societies, the gigs, the events,” adds brand director Craig Laycock.

Carr, meanwhile, admits to a certain envy of other simulation games where players actually formed emotional attachments to their tiny people, and wanted to add more of that to the Two Point series.

“So it’s less of a kind of a farm, as in hospital did feel like you were just farming illness, I think we’re trying to make a business out of it, but make you care about your students as well as you’re developing them,” Gary

“I think some games that we kind of were envious of, Sims being an obvious example is that they have this ability to make you care about the characters. And you kind of, you know, mother of them if you like. And I kind of want, you want to do a little bit of that, we want you to have a little bit more feeling that you know, you want to not see this as just commodities, you want you to want to try and make your care about them.”

Don’t worry if that all sounds a bit too serious and heartfelt though. As always there are the quirky touches that elevate the Two Point world above all the other management sims. There’s a cheese-based sport, sort of like a stinky Quidditch, that the colleges can compete in, and classes go beyond the usual English or Economics and into areas like jousting and cooking humongous pizzas. Oh, and now there’s the potential for architectural torture.

If the building limitations of Two Point Hospital cramped your style, you’ll be pleased to know that you’ve got an almost dangerous amount of freedom in Two Point Campus. Instead of buying set building layouts to fill with rooms, you now buy plots of land, which are yours to carve up with buildings, paths, and decorations. There are different building styles too, from the American frat house style columns to the more Hogwartion turrets and spires. Two Point Studios are fully expecting players to torture their staff and students by building nightmarish mazes between key locations.

“For players who do want to be completely creative and not have limitations, we will have sandbox mode at launch. So there’s a whole playground if you just want to play with these creative tools, or even just set settings to whatever you want them to be and kind of play your way,” says senior UI designer Lauren Woodroffe, as she demonstrates just how much power you have over your Two Point Campus world.

“You have a blank canvas to work on this time around rather than being limited to pre-existing buildings.”

Woodroffe has also worked hard on one of the big challenges for simulation games, making sure they feel intuitive to use whether you’re on a mouse or keyboard, a controller, or the Nintendo Switch.

As a huge fan of simulation games and a Two Point Hospital addict, I can’t wait to start bossing around students and professors and discovering all the eccentric little details that make Two Point Campus special. Most of all I can’t wait to see how it feels to see my class grow and change, and hopefully leave with top marks.

“You’re are shaping their lives, you are developing them. If they get to the end of the process, you will get continual income, and the prestige that your university will get through high grades is obviously beneficial from a gameplay kind of scoring system,” says Carr.

“But the byproduct we want is when you say goodbye to your first enrollment, if we can make you have a little tear in your eye as you’re waving them off into the great wide world, that’s awesome.”

Two Point Campus will be released on PC and consoles in 2022.